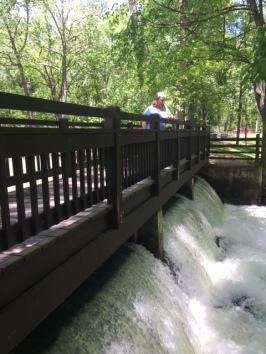 We have spent the last two days at Steelville, Missouri. This is a beautiful place in the Ozark Mountains with the Meramec River cutting through the mountains. The people are very friendly and helpful. The area was settled due to the abundance of iron.

We visited the Meramec Spring Park. This park is run by the James Foundation, named for a founder of the area, with the Missouri Department of Conservation. The MDC operates a trout fishery in addition to providing assistance and guidance for maintaining the park.

Over 100 million gallons of water daily flow to the surface from a spring opening in an underwater cave. Above the cave the water rolls like a pot boiling, but the water is a constant 52 degrees, which is a great temperature for trout. As you walk along the spring there is fish food available in gumball machines and the fish swarm those areas looking for food.

During the time iron was mined, a canal was built to divert water to turn a giant wheel that was used to power the equipment for smelting the iron. The canal is now used as an area for raising trout. The canal is divided into 4 pools with brown and rainbow trout being raised. When the fish are large enough they will be put transported to several rivers in Missouri.

Below the hatchery, where the spring rushes to the Meramec River, is some great trout fishing. We believe that this portion of the spring is stocked periodically, there were a lot of people visiting the park to fish and mostly to CATCH. We saw a large number of people walking along the spring with stringers of fish. At the park store, there is an area to clean your fish and a scale to weigh your fish. If a fish is over 2 pounds you get a special recognition. You are limited to 4 fish per person each day.

This is a great place for families. There is tent camping, fishing, trails, and who can resist feeding the fish or splashing in the water?